About a couple of hours of walking on the route to Rumbak in the Hemis National Park, suddenly the guys leading the trek were hushing us to keep quiet. They had spotted something. Immediately everyone went quiet, a hush fell upon the valley as all the struggling trekkers immediately stopped and took a deep breath. Eyes started to strain and so did the neck trying to catch a glimpse but nothing was visible. Anticipation and excitement gripped us, the silence that suddenly spread across the valley was surreal, we waited for a movement, panting and whispering to each other whilst waiting, what is it? Is it a snow leopard?! Don’t tell me we got to see it so early!!! Its times like these when you feel you should be leading the trek and not be trailing behind for then you just have to live with this suspense and fear that the leaders will probably see the thing first and you just have to wait for it at the back end.

Eventually our guide gestured with his hand for all of us to move ahead. Stumbling on the rocks came out this fella, strutting like the king of the place, poor fella is just fodder for the elusive Ghost Cat!

Here is presenting the Himalayan Blue Sheep also known as the Bharal! You can read more facts about this high altitude ranger here.

During our 4 days in the Hemis national park this is one ranger that came to see us the most, the way this fella runs on the steep, sharp cliffs is a sight to be seen and the balance that these people have there is unbelievable, I am pretty sure they do not ever suffer from vertigo!!! They don’t just balance but actually perform aerobics on cliffs and I am almost tempted to give you a warning!

I am the king of these places he seems to be saying… and I am going higher! 😀

Apparently the first one was just scouting the territory and checking if we were safe for his mates to appear! As he passed by…

the remaining folks in his herd appeared

Then we spotted these two stuck on a cliff… it seemed the one behind was complaining to us that his mate is a sissy and not moving fast enough! 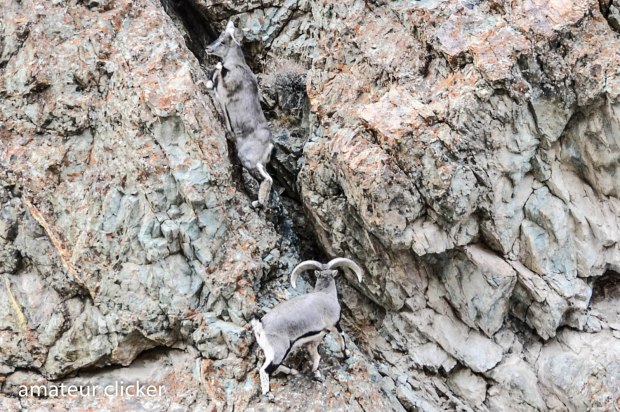 and then the other fella decided to show what he is made of!! 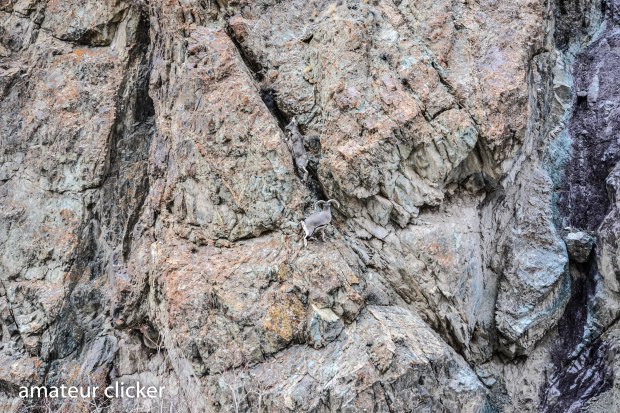 Just to give you an idea of how far and wide they were! It was a free fall of about 300 feet if even a centimeter of his calculated step went wrong!!! 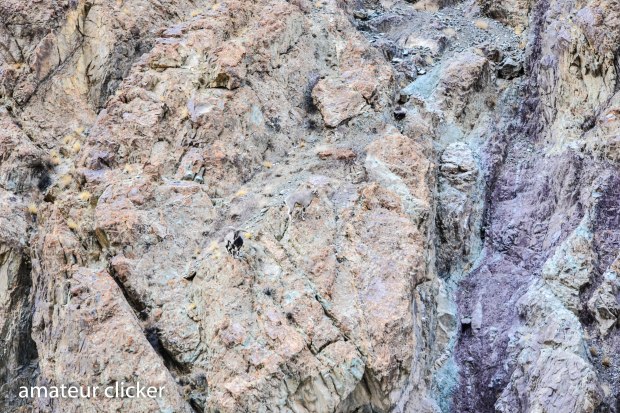 This is what they call living on the edge… never mind us humans who claim it!

You talking to me??

Yes… they do behave like they rule these places… they find the highest place to pose!!!