I love travelling and I also love capturing what I see with my camera whilst I am on the move, yet there are so many things that go amiss, that are not captured by the lens but only by the naked eye. Whilst somethings stay with us all our lives in our memory and some are captured by the lens or written down somewhere we do forget so many things which at that instant we thought were simply magical.

Recently, during our trip to Parvati Valley in Himachal, we tried to attend local festivals and understand local customs as well as living with locals. Stories about the whole experience will come up on the blog a little later. However, I must share this one picture I took. We had gone to a village Buhad, about 15 mins drive and from there a good 2 hour climb away from Kasol to see their mela, their Devta comes out of the temple the day of Baisakhi, people rejoice and dance and worship their god, kids play about and there is a festive atmosphere all around. So whilst I was busy witnessing the little village of Buhad immersed in festivities, my eyes fell upon this little girl. She apparently had bought a bubble blower and decided that she needed to climb up the first floor of her house and watch things from a vantage point. After a while she decided she had enough of watching and took out her bubble blower and started blowing bubbles. Luckily I was able to capture a few of her photographs! I simply loved them and I thought I must share atleast one of them! Here she is looking on at one of the bubble she blew and is sailing away in the wind. Hope you like it as well! 🙂 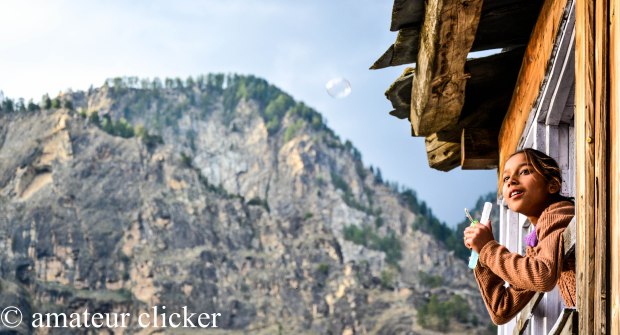 A group of children were curious on seeing us cyclists rriding in their village first up on monday morning. Some of them chased us and even rode our bikes when we stopped at the ghat to take some pictures of the river.

This lil girl was all tee hee on seeing her friends ride our cycles. I managed to capture a bit of her. 😀

Energy, determination and focus clearly visible in this air borne kid who is all set to shatter the mud plate!

Well well… the world was supposed to end today morning and my son has been curiously asking me way too much about it and I already regret having decided to tell him that some Mayan’s thought today the earth was going to end… Never tell an 8 year old that… no he doesn’t get scared he only gets so anxious and curious he will kill you with his questions and logics and actually make you pull your hair… just as you are enjoying Rahane smashing Sixes he comes up with a logic… login to gmail and talk to some friend in Australia… ask them if they are alive !!!! I am like why ? What ? It must be midnight so it must be 21st there and probably they are already being finished  😐  and then he will ask you, how are you going to save me and mom if suppose a flood comes ? Smart Dad says, we go to the terrace, well, what if the water goes above the 2nd floor, irritated dad says, we climb to the terrace of the building next to us, but logical son wants to know, how can we go to that building when we are on our house terrace and its water till 2 floors sigh.. 😐 Thankfully two wickets fell and the attention got diverted… *phew*

Anxiously enough today morning’s sky looked a bit like this at 7! 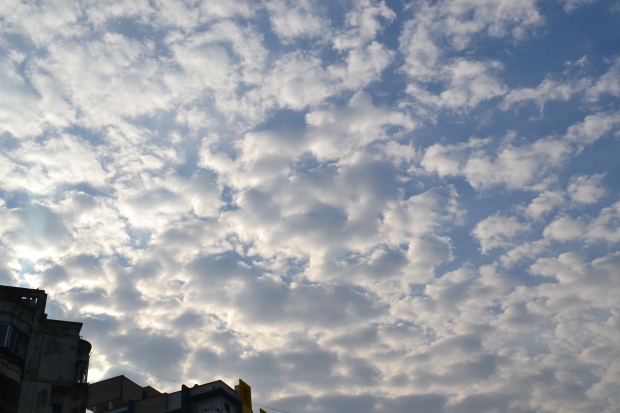 Kinda ominous na ?! 😛 Dont worry though by 8.30 it was like this 🙂 🙂 Yup that bulbul is my friend and is posing for you Sakshi 😀

Life was soon as normal as it could be 😀 with flowers continuing to add colour to this world. 🙂

I am also pretty much sure once he returns from school today this will be his expression the moment I mention 21.12.2012 the doomsday ! 😛 😛 😛 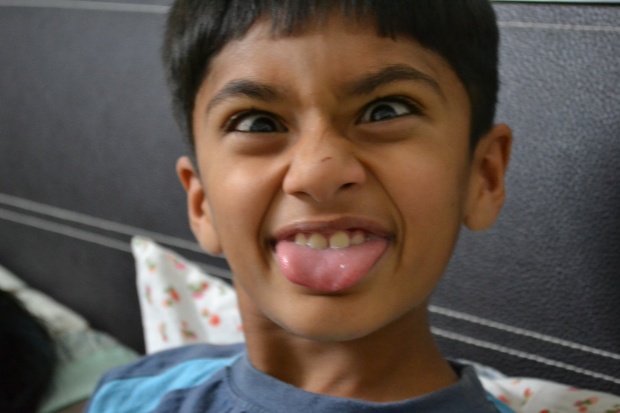 Its quite intriguing how kids change their playing habits, for a while its something that they are obsessed with and then suddenly its something new that captures their fancy.

The latest obsession my son has with the toy doctor set is unbelievable… half of the day he has the stethoscope in his ears and is listening to all sorts of things investigating the refrigerator, the floor, the door the phone, his toy animals gee… !

If you give the slightest indication that you have some problem the doctor in the house will be breathing down your neck with solutions !!!!! 🙂 😀

As I read more and more people suggesting Dhoni to play 5 bowlers or stick to 7 batsmen… I sort of smirk… they all dont get it do they… even Gavaskar’s, Shashtri’s and Bhogle’s too… the fact that differentiates Dhoni from the rest is the fact that he is his OWN man !

The media, former cricketers, crowd et all can go jump in the lake but Dhoni will stick with what he feels in his mind is best for his team.

A captain must not get swayed by emotions and judgements made by others and only follow things that he himself believes in as if something goes wrong he then has back up plans.

I still remember one of the best pieces of advice that Naseer Hussain considers he got was from Richie Benaud, a very astute skipper and thinker of the game. Benaud told him when he was appointed captain,

“Either do things your own way or dont do them at all !”

India must be glad even without that advice Dhoni comes straight from that school.

If you would like to read a bit more about captains Please visit the following link : https://hitchwriter.wordpress.com/2009/01/24/ace-skippers/

These days the one song that is always on my lips is Daaaaaarling…. aankhon se aankhen chaar karne do…. !!!! I just love the frenzy the song kicks up… ! Lovely twisty song I say… ! 😀

I infact even liked the movie…. Apart from the darkness in the movie… I envied Priyanka’s life as Madamji … wouldnt it be great to have such estates and such wealth which leaves you with nothing to do and all you have to do is to think of JUST living life… Seeking pleasures and satisfaction… instead of thinking all the time about how to earn a living to live a life… 😛 😛 😛 😛