The butterflies in the stomach cant flap their wings any more stronger, the adrenalin rush continues unabated, all sites giving all information have been read out, all views taken, all opinions read, heard, seen. Nothing still seems enough and you just cant pass the day. Being a holiday its even more difficult to pass, the constant highlights the past whole month on Star Cricket have not helped make matters any easier.

Over my growing up years it has always been the most exciting place to play and watch cricket, Australia. The country with hard sun-baked pitches, huge playing grounds, sea-gulls, flies, traditions, hats, beers and the crowds that were tough to win over. Also the fact that after I took to cricket around 1985-86 and the growth of the Australian aura coincided made me an even bigger fanatic of the tour of Australia. Ever since 1998 when Sachin after being made a bunny in the first innings by Warne in Chennai churned up that brilliant 155* the battles between these two teams have been most engrossing and mouth watering. The only abberations could be the 1999 tour of India where they were white-washed and subsequently M S Dhoni paying the favour back on Australia’s last tour of India where they beat them 2-0 in a series of 4.

Those two series apart the 2001 series was one of the best ever seen by me, if not the best ever played, where the world champion team was brought down to ground by rookies. Waugh’s Australians were on a record streak of consecutive Test victories they had won 15 consecutive tests and came to India to Mumbai. Waugh billed it as the Final Frontier for this all conquering team and India had a new captain and were without Anil Kumble. It seemed the Final Frontier was going to fall. Whilst India had a slender chance when Australia were 99/5 in their first innings in Mumbai the game changed after Gilly and Haydos decided to simply sweep the Indian off-spinner, apparently turning the ball square, to individual hundreds. The Aussies thereafter romped to victory after 3 days. I was in Wankhede to see that pasting we got. 😦

Surely, after 16 consecutive test wins it was only upto Steve Waguh’s men to turn up at Kolkata and victory would be theirs. India were following on with a deficit of 274 runs and it was all but over. The biggest optimist of Indian cricket could not have fathomed what was to come. Two men batted as if they were possessed, the best bowling line up of my era had gone wicketless a full day, a Hyderabadi artist would collar the world’s best leg spinner and a defiant Banglorian would not cave in. They scored and scored and scored, the bowlers went from grumpy to red hot angry to eventually wow at the contest and applaud what they had just witnessed. Herculean efforts was what it took to stop Mcgrath and Warne and deny them a wicket one whole day. The last day a young brash captain inspired his equally brash off spinner and they decimated the World Champion batting line-up in little over 2 sessions. The visions of that Test Match and the mad crowd of Eden Gardens is stuff of Legends.

India took the final Test in Chennai and it was 2-1.

The 2003-04 series which was seen as a chance to avenge the rude shock in 2001 by the world Champions. Quite contrary to the talks of Chin Music it turned out to be one of India’s best batting display down under. The Australian’s were wowed by the batting line-up and they genuinely even admitted that at times they got a feeling the Indian batsman were meditating!!!  India failed to seize the initiative in Sydney where they didn’t enforce the follow-on in the last Test after being 1-1. Winning in Australia still eluded India.

Australia finally won a Test series in India with a stand in captain, India was robbed of their chance in Chennai by rain and the series went 2-1 to Australia.

The following tour of India to Australia under Anil Kumble in 2007-08, was most troublesome and the Aussie captain was lambasted for his win at all costs attitude. Anil Kumble’s remark of only one team was playing in the spirit of the game after Sydney rankled the Aussie media and public and they all went after their team, after being 2-0 down India put on a steely performance that mirrored the image of their captain and they won a famous victory. Once again Australia had won 16 consecutive test matches and were poised to win their 17th in their favourite hunting ground where astonishingly India stopped them and although India couldn’t push victory in Adelaide the 2-1 series ensured India’s pride was restored and Australians were left with a victory 2-1 but a bitter taste in their mouth.

Then began the Aussie fall and India’s rise and India blanked them 2-0 in a 4 test series. This series was slightly one sided with India going to become the best team in Test Cricket atleast in terms of ranking.

Now in 2011 on Boxing Day these two teams take will be in combat once again on the biggest stage of all at the MCG. This time though both teams don’t seem confident, which is new for the Australians, especially in Australia. Plagued by injuries and form loss they converge on the most awaited Test Series of the year. Its this series that will make some careers where as some will bid good bye to their legendary careers.

I can’t wait for tomorrow to see Sehwag take strike and Pattinson bowl to him with wind behind his back. Its show time… let the games begin !!!!! 😀 No I am too superstitious to make any predictions. 🙂 **touchwood**

Hey btw I read this very encouraging and interesting article inquiring when is the first 500 in tests going to be scored !!! No prizes for guessing who is the batsmen being expected to do this  ! He is no one else but our very own Veeru 🙂 🙂 🙂 and the writer and Australian !!!!!! 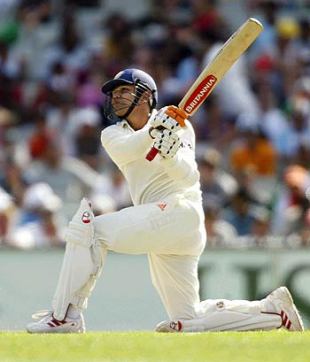 Cheers to this love, hate & admiration between Indian and Australian Cricket !