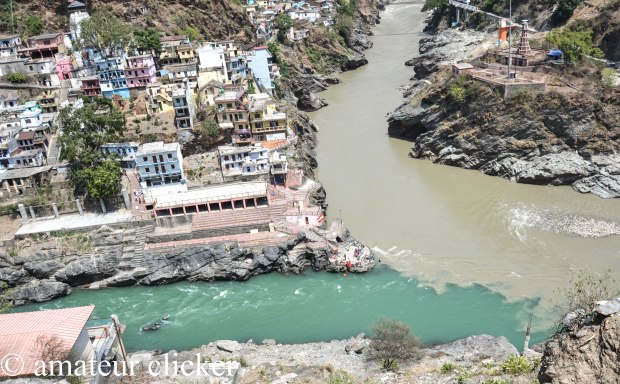 This little town is called Devprayag, it is here that Bhagirathi, the green coloured river meets Alaknanda, downstream beyond this confluence the river is call Ganga!

Devprayag is approx 70kms from Rishikesh, situated at a height of 830 meters (2732feet), is an important place of pilgrimage for Hindu’s.

We were intrigued and amazed at the contrasting colours of the two rivers, however, we have been told by locals that the colours keep changing depending on what is happening upstream. At this point though the contrast was quite stark!

I guess we have all read the mountains being described as blue somewhere or the other and frankly till a long time in my life I used to think its only poetic and that no such thing ever existed, that it was just a figment of imagination of some writers and they probably felt mountains being described as brown or green or black wouldn’t make them that exotic and wouldn’t bring that many people to the mountains and hence they used the adage “Blue Mountains”

Over the last few years I have been fortunate enough to be able to make a regular trip to the Himalaya’s and have been lucky enough to witness some vast mountain ranges, I have actually seen and realised that Blue Mountains exist! 🙂

There is something about these slopes on the surface of the earth, these high rising mountains lining up one after the other that just amazes me. Especially when you can find a spot to sit and actually gaze at the sheer enormity of the place they call The Himalaya’s you should consider yourself truly blessed to be able to absorb all this by your eyes. The above picture was taken when we were actually leaving the Himalayas and returning to the plains, I have always been enchanted by the mountains and will probably never ever be able to see the Himalaya’s enough in this life time and hence am always kind of sombre when leaving the mountains.

Looking at the rear view or the side view mirror and realising and almost bemoaning the fact that I have to leave the mountains almost makes me sad, I sometimes get lost in the gazing and that it is almost fatal on a road trip! Thankfully the mountains have always been kind to me and always ensured and sent me back safely. I long already having come back just 10 days before to go back. I surely must have been somewhere there in the mountains in my last life, if there was any such thing!

A shy and equally curious face peeps at us as we pass through Nagini Village on our way to Peace Waterfall in the Tirthan Valley! The village had a lot of friendly people who were happy to smile and guide us on the right way! 🙂

for more photo’s on the Faces of India Meme visit Indrani’s blog here.

A White Naped Tit shakes the wings off a moth it just managed to catch.

Gotcha! This elusive one wouldn’t stop still for one second, I had been chasing this one for the past 10 minutes finally I nailed it! 😀

The thing with photography is you start visualising frames everywhere, every blade of grass, every bit of cloud, every wrinkle on a face you see, you imagine framing them, you imagine capturing them in the stillness of your camera. This bug is just unbelievably infectious and wonderful, I see so many things now that I used to ignore earlier!

A bit of pollination has perhaps begun, since its summer and growth time in the Himalaya’s! 🙂 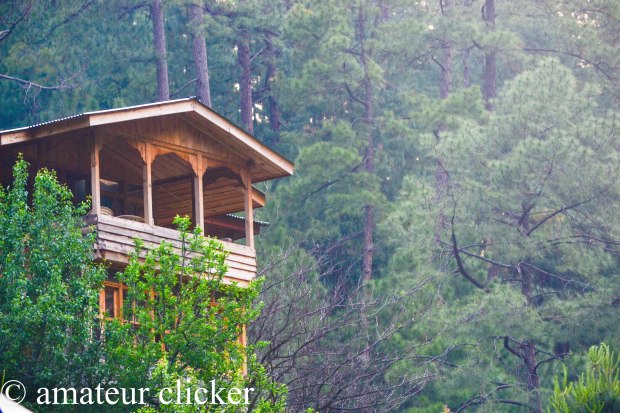 Remember exactly a year back, I had posted about the start of a new love affair. I had promised myself I will surely visit the place again, I did, this time with my son.

We were skeptical for a bit whether our son will like the place as much as we did, he suffers from the modern kid syndrome, plus he is hyper active so he is always like what next to do. Raju’s Guest house has a lot of activity to do if you choose to, but then on most of those activities your 10 year old will need some monitoring and plus no TV was a sort of a challenge we wondered how will the kid take.

To tell you the least, when we left Raju, the kid was quietly sitting in the back of the car. After a while I just turned back to see what was he upto, the kid was weeping, I stopped the car and I had to ask why!?

In the three days we spent there, the kid loved the place so much he was utmost sad to leave the place, he almost kept at crying for more than half an hour quietly weeping and remembering the place. The air of the place is such that we just can’t help but mingle with the other guests, he got extremely attached to two other guests in their 60’s who were staying there, we even took them with us for a trek which they gamely tried for a while then decided to sit and wait till we exhaust our lungs and come back, afternoons would be spent playing pick up sticks with uncle and aunty sipping on Rhododendron juice and evenings after dinner would be relished playing UNO with the lip smacking ‘Sevaiyaan’ cooked up by Raju’s wife.

Sometimes when all the adults had ate too much and wanted to sleep, the kid would happily spend his time plucking cherries or spotting a different bird or simply patting the four lovely dogs that Raju has! We were amazed that a kid that was petrified of dogs before this trip was all of a sudden hugging them! He would chase the cats, which were shy and kept distance. On on dinner occasion he infact didn’t sit with us for dinner and sat with his favourite Uncle & Aunty and actually gobbled up three roti’s!

Most of the time we had difficulty getting him to finish one and half. To say that he loved the place would be the understatement of the century. Like me when I returned back from Raju with a promise of surely returning again, this kid has probably made his own promise to himself!

I say, our family has all but fallen for this beautiful haven!! The hospitality of Raju Guest House is stuff of legends, I can never thank Karan and Varun enough for the wonderful job they do.

Hoping the month of December keeps flowing fast and passes in a wink!

Lockdown no problem. @hetal5878 has ensured we have our sugar dosage intact 😂 Yes showing off 😛😛 #kesarmalaipeda #homemade
This fellow keeps all other birds on their toes, the pigeons are particularly vulnerable to it and they will eat anything from small birds, rodents, even snakes, lizards, frogs and squirrels too. He sits quietly in the shade, like a monk almost, moving just its neck, scanning whats worth some snack! This is a Shikra, also called Indian Sparrowhawk or the Little Banded Goshawk is a small but powerful raptor. Their vision is eight times more acute than the vision of humans. Shikra have strong legs with sharp talons and a sharp, hooked beak, which they use to kill prey and tear it into pieces to eat. It is an excellent hunter. Usually it lays 2 to 7 bluish white eggs, the female incubates the eggs while the male brings it food. The young bird spends one entire year in the parents habitat. Thankfully this species is listed as least concern as numbers are abundant and widespread. #shikra #birdwatching #birds_gardenical #raptors #bird #raptor #goshawk
This pair of Yellow Footed Green Pigeon have caught my fancy, they are always posing. Mostly doing things together, seldom do I spot them alone except when one is in the nest in the Ashoka tree and another is collecting sticks. Cant see its nest so no idea if its been made or not. They have kept it very well concealed. . Thanks to the lockdown I have been spending an elaborate amount of time having the morning breakfast and evening tea in the garden while ogling at these beauties. . #21daysofgratitude #grateful #greenenviroment #garden #birdwatching #birds_gardenical #yellowfootedgreenpigeon
Cooking Maggi at 13000 feet for a lunch break on the trail of the Snow Leopard! With this lockdown in case you want to read about a crazy trip to Ladakh in winter trailing a Ghost Cat. Link in Bio. #ladakh #winter #snowleopard #snowleopardtrail #hemisnationalpark #jammukashmir #india #trekking #travel #travelblogger #maggi #nestle
I am consumed by the chill of the solitary - Alanis Morisette What bird watching has taught me is how to keep yourself enthused by just sitting in an open field and gazing about, observing, gathering, noting and marvelling! #birdwatching #outdoors #naturalworld
The spring has brought flowers in the garden and that has ensured that the Purple Sunbird family is here and nesting in the Lemon tree. Its quite amazing to observe how they are gone during times when there are no flowers and appear out of no where when the flowers grow. 😀 They usually build nests suspended from thorny plants, usually in gardens, the female incubates the eggs, eggs are in clutches of 2-3, the eggs hatch in 15-17 days. The males assist in the feeding process. #purplesunbird #birdwatching #sunbird #bird #spring #flower #nectar #birds #birding